Our families have known each other for generations, but we didn’t meet until 2003.  I was 14 and Paul was 17 and we weren’t interested in each other yet, but we immediately had fun together and would talk to each other off and on for the next couple of years.  Whenever we did talk to each other it was full of laughs!  We really had a great time laughing about nothing and becoming great friends!

We both went to Bible Training Institute in 2005, and my Mom and I got to pick him up late at the airport late at night.  The second I saw him him walk through the gate I fell in love with him and knew that he was the man I was going to marry.. if I didn’t marry him I would not marry anyone.  (I didn’t know till later that Paul fell in love with me the same night, the second he saw me waiting for him at the airport.)

We were in a long-distance relationship for 2 years after BTI.  He lived in Montana and I lived in Arizona.  It wasn’t easy, but it was totally worth it!

Paul moved to Arizona, and it wasn’t long after I turned 18 that he asked me to marry him.  We were happily married on February 29, 2008!  It was the most beautiful wedding.. it just happened to be my own. 🙂

We moved to Montana soon after we got married and have been living in this beautiful state ever since!  Paul went to Montana State University – Northern and received two bachelor degrees.  He has been a conductor for BNSF Railway since 2014 and enjoys getting paid to play with trains all day. 🙂  He also loves to help with worship at our church, The Church of God, when he is home and able!

Mom always said to marry your best friend, and make sure he makes you laugh!  Well, Paul is still my best friend in the whole world, and we still laugh at each other every single day!  We have a great time together, and now we have four beautiful kids with great personalities that make us laugh even harder!

I stay home raising our four energetic kids.  My days are filled with homeschooling and trying to keep up with housework and laundry.  I do everything around town with my kids in tow and so people are starting to recognize me at the grocery store and I have been applauded for my endeavors. 🙂  It’s a full-time job that leaves me tired, overwhelmed, but mostly satisfied because I see them growing up with kindness, love for others, and appreciating God’s beautiful earth! 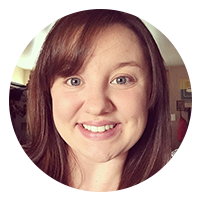 "By and large, mothers and housewives are the only workers who do not have regular time off. They are the great vacationless class." -Anne Morrow Lindbergh